AudioTechnica has set the bar high when it comes to electro-acoustic designs and manufacturing and their range of innovative microphone lines have garnered a lot of attention and acclaim. They have a sturdy range of microphones that are pretty reliable and don’t have a lot of bad reviews. The at2020 and atr2500 have exceptional sound quality but how do you choose between the two? Well, we created a guide that lists the similarities, differences, features etc.—consider it an ATR2500 vs AT2020.

Audio Technica promises an incredible range of at2020 microphones and it has yet to disappoint. You should note that it is an XLR condenser mic which means you need an efficient audio interface and a phantom power, in this case, +48V, to get the best from it.

It has an incredible build with an all metal chassis and grill giving it a nice bit of weight so it doesn’t feel too cheesy. There is padded protection on the mic storage pouch and adding to it is a robust microphone mount made of metal.

With a frequency response of 20Hz to 20kHz, you couldn’t ask for more in a microphone. An acoustic guitar would have a rich clean sound. Electric guitar and vocals sound pretty crisp on this mic. With that regard, it does an incredible job at the lower end by receiving and controlling frequencies without giving them too much boom in the sound quality.

It also features a pretty directional cardioid polar pattern which gives it about 180-degrees for receiving frequencies. Essentially this means anything ahead of the mic will be picked up and anything in the rear will not.

If you will be using it next to a keyboard, then you should expect to hear a bit of tapping but more of your voice than the keyboard. Also, in the distance, you should expect a drop in volume but nothing too drastic.

==>> If looking for a USB model instead of XLR one, check out our review here.

Overall, it’s an incredible mic and the overall customer satisfaction is pretty good. If you’re looking to get a proper mic but not you’re not that much into high-quality audio,then, unfortunately, this isn’t for you. It’s an excellent choice for those of you looking to start a home studio and need high-quality audio recordings. Lastly, I wouldn’t recommend it for run of the mill voice overs and gamers on a tight budget. 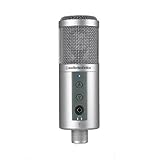 The atr2500 falls under the affordable range of microphones offered by Audio Technica, without a sound quality trade-off.

It has a decent build quality except for the 10pc plastic which makes It seem rather cheap. Also, the mount feels a bit weak and doesn’t have any shock proofing materials.

It has USB output which makes it easy to connect to the side-address condenser mic to the computer. According to the specifications sheet, it has a frequency range of 30Hz to 15kHz which isn’t the best but when listening to it, it has a crisp sound quality. This could be because of the EQ which makes up for the high frequencies.

Additionally, it has an embedded headphone jack which makes it easy to monitor it directly from your microphone and it also has adjustable volume controls for your headphone on the microphone.

Also under the hood is a top-notch AD convertor which has 16 bit giving it a sampling rate of 44.1/48kHz. Thanks to the fairly directional cardioid polar pattern you won’t pick up any noises from the back or the sides.

The atr 2500 is compatible with the major operating systems i.e. Mac OS and Windows OS so you can rest assured it will work seamlessly with your audio software.

Audio Technica’s atr2500 is perfectly suited for podcasts, field recording, home studio recording, and voiceovers. It’s an excellent addition for the controlled environment musician and despite little noise picked up acoustic and electric guitars sound superb on this mic. You would also be better off investing in shock protected mount, a stand, and a pop filter.

They both use a weak material for their stand which makes it notoriously easy to break in an accident so you’d be wise to invest in a separate stand.

The ATR2500 and AT2020(plus) feature a headphone jack which you can adjust the volume from the mic and also a live no latency control (the time delay between sound input and live soundcard output).

The regular at2020 lacks any embedded features but is quite versatile for recording almost anything while the atr2500 doesn’t do well for all types of recording and is mostly for gamers and voiceovers.

The atr2500 has an embedded volume control on the front which is pretty handy, unlike the at2020.

For those who don’t want to use XLR you’re better off with the at2500 audio technica model as the at2020 is a XLR condenser mic. If you still would like to use the at2020 then you should invest in a suitable audio interface and/or a phantom power adapter.

The at2500 compromises on quality of vocal compared to the at2020 and it also has a relatively cheaper build. It’s essentially for those on a tight budget.

With that being said, you will still to invest in proper mic stand, a pop filter and shock protected mount for either the atr2500 or at2020.

Overall, both the atr2500 and at2020 offer better than average quality of voice recordings. The atr2500 is better suited for podcasts, voiceovers, gamers and YouTube commentaries and mostly in a controlled sound environment while the at2020 is ideal for field work, home studio recording and also voiceovers in studio environments. We recommend the at2020 because of its high-quality recording no matter the environment. What are your thoughts on ATR2500 vs AT2020 mic battle? Let us know in the comments!

Neumann TLM 102 Review – Clarity And Transparency At A Bargain

Best Microphone For Voice Over

Should You Allow Your Bridesmaid to Do Your Wedding Day Hair...

Best Under Desk Elliptical – Keep Fit In Your 9-5

ABOUT US
workingwikily.net is a participant in the Amazon Services LLC Associates Program, an affiliate advertising program designed to provide a means for sites to earn advertising fees by advertising and linking to amazon.com
FOLLOW US
MORE STORIES
Audio